Why Are Greeks So Hospitable? An Anthropologist’s View

Is there more to a spoon sweet than meets the eye? Anthropologist Sofka Zinovieff examines the hidden layers of meaning in Greek hospitality. 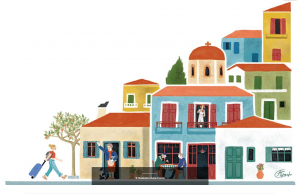 I first lived in Greece in the late 1980s as a student. I’d exchanged chilly Cambridge for the beautiful Peloponnesian town of Nafplio and was carrying out postgraduate research on modern Greek identity and tourism. Like many first-time social anthropologists, I was learning on the job – studying the language, attempting “participant observation,” and trying to meet as many “informants” as possible.

“Come for a coffee and you can study us!” friends would quip. Whenever I visited someone’s home, I was consistently treated with kindness and generosity; almost without fail, there was a glass of cool water and some homemade spoon sweets. This was often followed by coffee and koulourakia (cookies), and often cooked food followed as well. Whenever I declined to be fed on the spot, I was regularly sent away with parcels of spinach pie or other delicacies for later.

This largesse was a delight and I began to appreciate how significant hospitality was in Greece – caring for the stranger resembled a Christian virtue but was clearly a tradition from Homeric times, when an individual’s worth and honor was measured according to how he treated a guest. Nafpliotes were proud of being philoxenoi, of literally “loving” the xenos – the stranger or foreigner.

As a foreigner, I began to realize that there is an established etiquette not only for the host but also for the guest. Nobody should forget what Odysseus did to Penelope’s greedy, inappropriate suitors, who lost their dignity (and eventually their lives) for abusing the rules of hospitality. Was it disrespectful, I wondered, if I rejected an offer of food? What should I do after the third or fourth home visit in a day, when faced with yet another slab of walnut cake or cut-glass saucer of bitter orange peel in syrup? Most Greeks would disapprove of someone who doesn’t even offer water to a visitor, but a guest who doesn’t respect his host’s munificence is a disrespectful, ungrateful wretch.

Of course, hospitality didn’t only exist in the home; by extension, a café, taverna or bouzouki club worked just fine. I frequently witnessed disputes and even anger flaring between diners in a restaurant when one person succeeded in paying the entire bill, and thus made himself the “host.” I was initially bemused by people paying for me wherever I went. If I protested, the response was often: “You can pay for me in England.” Possibly. But would they ever come? And in England, this wasn’t the way things were usually done; bills were regularly split between all the diners. However, even in England they say, “There’s no such thing as a free lunch.” And this saying points towards the hidden layers of meaning in Greek hospitality.

Anthropologists argue that there’s more to the phenomenon of hospitality than free-floating kindness – it’s part of a system. In many pre-industrial societies, you automatically give a stranger a meal or a bed for the night, knowing that someone else should do the same for you or your loved ones. These habits become deeply ingrained. Some degree of reciprocity is always implied, even if it is not implemented. Add to this equation the fact that historically, an unknown visitor always represents potential danger, and making them grateful and obliged becomes an even better idea. 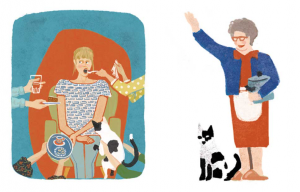 More significant than either of these factors is the way hospitable behavior contributes to social standing. Malinowski’s seminal research amongst the Pacific Trobriand islanders showed how the competitive exchange of gifts between communities (known as the Kula) was a method of forging alliances, creating social solidarity, and obtaining power and influence. A Trobriand “big man” will attempt to outdo his rivals with the extravagance of his gifts.

One only has to witness Greek “big men” paying for everyone on an evening out or offering feasts in their homes to realize that a not-dissimilar process is occurring. I recall times in Nafplio when food was almost forced on me by insistent hostesses; it sometimes felt like world domination by food! And, naturally, it’s not just Greeks working these systems; wealthy US philanthropists are doing something comparable when they pay thousands of dollars to attend glittering, well-publicized charity dinners. Social power deals in perceptions.

The Harvard anthropologist Professor Michael Herzfeld argues that, on Crete, hospitality allows a symbolic reversal of power relations. The guest or stranger who is offered nourishment or a gift or invited into someone’s home becomes obliged, whatever their social standing. A host acquires the upper hand over a guest, even if he or she is poor and powerless and the visitor rich and powerful. As Herzfeld writes, “At the level of collective representations… [hospitality] signifies the moral and conceptual subordination of guest to host.”

Over a decade after finishing my PhD, and after having lived in Moscow, London and Rome, I returned to Greece with Vassilis, my Greek husband, and our two young daughters. In Athens, I soon saw that aspects of traditional hospitality and generosity have survived, even if circumstances have changed. The reality of millions of tourists visiting each year makes it harder to find the random acts of kindness encountered by earlier travelers. And while many Greeks have been inspiringly hospitable and openhearted towards refugees and migrants (whose mass arrivals coincided with the country’s own recent economic crisis), we have also witnessed philoxenia’s ugly opposite – xenophobia. Nevertheless, the tendency to maintain social ties and rules of hospitality within the city is still reminiscent of earlier times in more rural communities.

I believe that one reason why these old systems still flourish is the Greeks’ long history of doubting power and mistrusting the state. When you don’t believe the authorities will protect you or fulfill their duties, it is vital to create bonds with individuals who may help you at some point. At its worst, this tendency is seen in the rousfetia (favors) handed out by politicians hoping for support, or in the fakelakia (“little envelopes” of cash) slipped to hospital doctors. The use of slang words for potentially useful, personal connections (koné, meson) hints at their significance.

At their best, however, these bonds are an informal association between people creating loose ties of obligation through gifts and hospitality. When you treat someone to a coffee or a meal or invite them into your home, you bind them to you in a fluid, open-ended debt that may never be repaid but that may help you in some way in the future. This is the village within the city.

Needless to say, the potential for self-interest does not detract from the positive impact of hospitality which, by its nature, creates a “virtuous circle.” The smaller rituals of traditional hospitality remain hardwired in Greece; you rarely enter someone’s house without being offered a glass of water, and usually much more. A host is still expected to bestow abundance on a visitor and, while anthropologists may tease out symbolic or practical meanings, these potential benefits are unlikely to be the conscious motivation for the person giving or receiving.

Greece has changed dramatically in recent decades, but the self-worth and honor of an individual – their philotimo – is still reflected in how they treat a guest.

Reading Greece | Sofka Zinovieff: “I have a strong belief in the resilience of Greeks” What does it mean to be Greek? What connects Greek and British people? How does the ancient Greek heritage weigh on contemporary Greeks? These are some of the questions that the acclaimed British author, Sofka Zinovieff, attempts to answer in her